Today, I want to look at some of the structural changes that have occurred and what that might mean for the US. I don’t have any answers, but I think its important to notice that the culture in the US may undergo a substantial shift in the next decade or two. Or to prevent that shift we would need a substantial financial/ political change to bring back some equilibrium.

The following graph shows that we have a class of people who have become long term unemployed and it doesn’t look like this number has peaked yet or shows any hurry to come back down. These people will soon exhaust their extended unemployment benefits and states are starting to cut back on their welfare programs (e.g., California). If this group starts to be labeled as lazy and being responsible for their plight, this is a recipe for political instability. 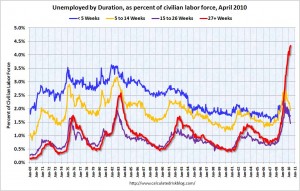 Much of the last century was about solidifying the American middle class culture. That anyone with hard work, some education and a little luck could have the American dream. The following two graphs shows that after WWII and the great depression, incomes disparities in the US dropped dramatically and the great middle class was born. This culture has served our country very well. Unfortunately, over the last 20 years we have completely undone that trend. Our income disparity is now starting to look like it does in developing nations. This is a MAJOR cause of instability in developing nations (see Thailand’s current problems). 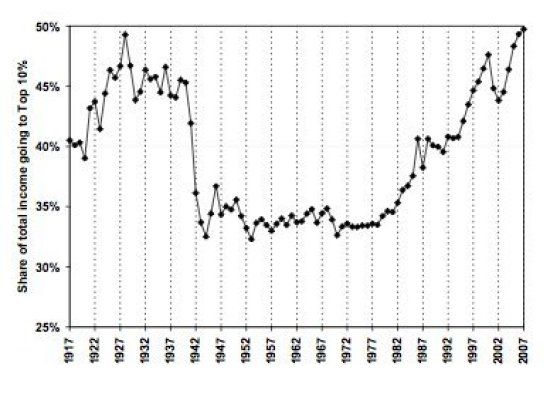 The Gini Index measures the disparity in incomes between the richest and poorest citizens of a nation with high numbers indicating greater disparity. If you look at the CIA World Factbook, the US currently has the highest Gini index (45) of any developed nation (it is even higher than Thailand’s). Most developed nations have Gini indexes in the 30’s.

I have no idea what the end game of this trend will be, but I would guess it means either dramatic changes to our government (e.g., higher taxes and social support) or to our culture (more gated communities and segregation) over the next 20 years. Because self segregation can easily make the suffering invisible to those better off, when change happens it is going to catch a lot of people off guard.

This entry was posted by David on May 20, 2010 at 9:54 am, and is filed under Uncategorized. Follow any responses to this post through RSS 2.0.You can leave a response or trackback from your own site.