« Feynman and Other Lectures
July Real Estate in Graphs » 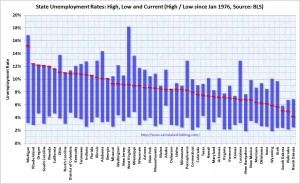 While much of the economic attention has been at the federal level, the states are not all suffering equally.  California has been grabbing the healines, but it is not the only state suffering.

Mary Daly of the Federal Reserve Bank of San Francisco provides the following map of State budget gaps (i.e., how much their revenues are below their budget).  States like California are likely to lead the way in cost cutting and revenue raising measures.  Expect increased municipal bond volatility in the distressed states as their administration and legislative bodies wrestle with closing the budget gap.

There has been some talk of federal aid to the states, but with the current level of partisan politics, I see this as unlikely.

This entry was posted by David on August 10, 2009 at 8:15 am, and is filed under Commentary. Follow any responses to this post through RSS 2.0.You can leave a response or trackback from your own site.