Unemployment — Going Where? Which Means? 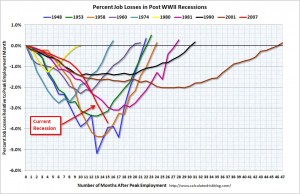 The March Employment Report is out. This graph from CalculatedRisk shows the job losses from the start of each employment recession of the last 60 years in percentage terms (as opposed to the number of jobs lost).

The trend shows that as we have moved away from a manufacturing dominated economy making  job losses less severe but longer lasting.  This begs the question of what will happen this time since job losses have been much more severe than in the recent past.

My best guess is that when unemployment does turn around we will initially see a sharp recovery as demand normalizes from abysmal to just low.  But that employment recovery will quickly taper off taking at least another 3 years to get back to previous employment levels. 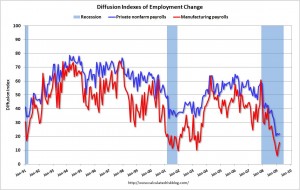 This graph show how widespread the job gains or losses are.  The diffusion indexes for private nonfarm payroll employment is based on estimates for 278 industries. Each component is assigned a value of 0, 50, or 100 percent, depending on whether its employment showed a decrease, no change, or an increase over a given period. The average (mean) value is then calculated, and this percent is the diffusion index number.

So the current value of less than 25 for nonfarm payrolls means that more than half of those 278 industries are showing employment declines which means unemployment is being widely felt across different industries.

So what does all this mean for the markets?

Unemployment is a lagging indicator for the economy.  That means unemployment still gets worse even after the economy first turns around.  With that said, I do believe that unemployment does play a part in the level of optimism people are able to maintain, especially when unemployment is at very high levels.  Almost everyone is either affected directly or knows someone first hand who is suffering.  And I believe it is optimism that will dictate how fast the markets bounce back and whether they can stay up.

The initial drop in consumer demand was driven by shock and fear of the financial crises. Once people are satisfied that the financial system’s problems have been properly addressed (we are not there yet), demand should recover from the current unsustainably low levels.  Unfortunately, the decline in home values and the job market uncertainty that is likely to linger for quite some time will keep demand below historical levels.

The slow improvement in unemployment will also put a damper on optimism.  To me, this means even as earnings start to improve again, PE ratios are unlikely to rapidly expand keeping them below their historical average.  I think it is very unlikely that we will see a return to previous valuation levels in the next few years.

This entry was posted by David on April 13, 2009 at 11:09 am, and is filed under Commentary. Follow any responses to this post through RSS 2.0.You can leave a response or trackback from your own site.