With the market up over 27% from its lows last Friday and lots of positive earnings surprises there is almost a viceral buzz building of people hoping it is a sign that we have hit bottom and things will start to get better.

From an economic standpoint this is almost certainly untrue.  While things are certainly deteriating more slowly, they are still headed downward. 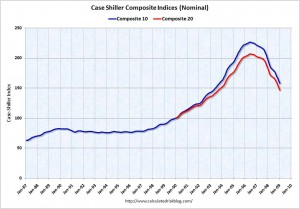 Housing prices will continue to decline into next year.  New homes sales will probaby hit bottom this year, but a bottom in prices lags the bottom in sales.  Furthermore, the bottom for existing homes trails that of new homes, so the sales bottom for existing homes will probably be hit early next year.  The final bottom in prices could be another year after that.  Summary: Housing prices will not begin significantly recovering for at least two years.

This is important for two reasons.  First, a lot of “toxic assets” are tied to housing prices.  So those assets aren’t going to be worth anything near their book value for quite some time (if ever).

I believe banks have been able to show profits this quarter because of accouting games.  For example, a bank might have a mortgage security on its books at 90 cents, when its current value is actually 30 cents.  It also had a collateralized debt obligation with AIG on that security which is now worth 60 cents (90 – 30).  Since AIG is selling all of its CDO contracts, the bank  closes the contract for a 60 cent profit.  Notice they still have a 60 cent loss, but that hasn’t been realized yet so it doesn’t affect the reported profits.  AIG lost $99.4 billion last year with most of that going to other financial institutions (from the taxpayer).  Summary: Banks will still take a few years to stabalize and achieve predictable profitability.

Secondly, home equity has been a key source of wealth for the consumer over the last 8 years.  Without that additional wealth, economic growth would have been much more anemic.

Consumers will not be able to borrow from their houses to overcome economic losses in this downturn.

Summary: Once Real GDP begins to grow again, it is unlikely that it will get much above 1% for the next few years.

As a lagging indicator, unemployment will continue to increase into next year.  Coupled with housing prices, this will continue to put pressure on consumer spending and keep it from creating a strong consumer led recovery.

What does all this mean for the stock market?  It means for at least the next two years there will be enough bad news floating around that it won’t take much of a trigger to cause sentiment to go negative precipitating large drops in the market (even possibly to new lows).

So make sure that money in the stock market is truly there for the long term, because over the next few years dramatic swings both up and down are likely.

This entry was posted by David on April 27, 2009 at 9:16 am, and is filed under Commentary. Follow any responses to this post through RSS 2.0.You can leave a response or trackback from your own site.